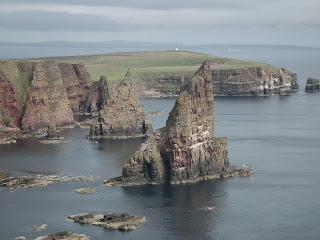 The upside of the poor July salmon fishing highlighted in my previous blog was the excellent weather that Caithness shared with the rest of the country, albeit a few degrees lower. The photo above shows the stacks of Duncansby from the south with the tip of the lighthouse and Orkney behind.
In Caithness, July is the month for agricultural shows and Highland Games. The annual Caithness County show was held in Wick this year at the riverside in brilliant sunshine on firm dry ground. 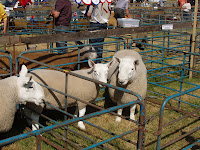 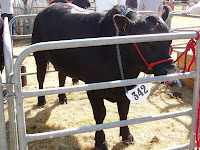 At the judging, North Country Cheviot sheep as well as black cattle seemed to be the best represented. Entries in all cattle classes were down on previous years, a result of the restrictions imposed when farmers move cattle these days. 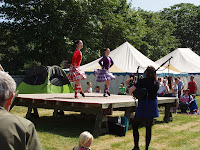 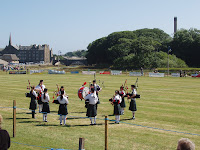 The highland dancing proved to be a popular event, the ever keen dancers appreciated by the spectators and their competitive mums and the Caithness Junior pipe band played throughout the afternoon. 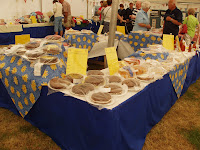 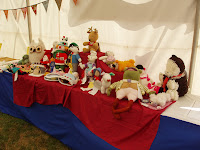 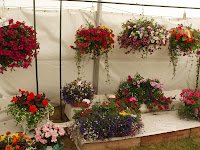 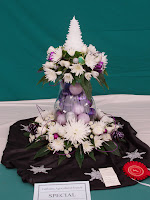 The flower tent had the wow factor with gorgeous displays of the hard work of local gardeners and some amazing prize winning flower arrangements.


The show is now a major commercial event with all the big agricultural machinery suppliers represented. Tractors seem to get bigger (and more expensive) every year thanks no doubt to the largesse of the EU Common Agricultural Policy. 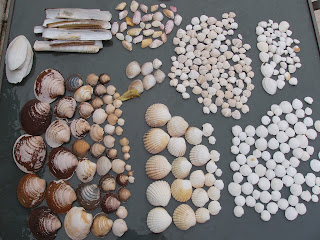 Finally, this is the haul of shells  we collected from Caithness beaches over our stay in the north. I'm looking for ideas for ornaments, jewellery etc. All contributions welcome.
Novels by Alan Calder
The Glorious Twelfth, set in Caithness.
https://museituppublishing.com/bookstore2/index.php?page=shop.product_details&flypage=flypage.tpl&product_id=531&category_id=69&option=com_virtuemart&Itemid=1&vmcchk=1&Itemid=1
www.amazon.co.uk/dp/B00BG04SS8
www.amazon.com/dp/B00BG04SS8
The Stuart Agenda published by Willowmoon
www.amazon.co.uk/dp/B005BJ3GNI
www.amazon.com/dp/B005BJ3GNI
Posted by Alan Calder at 15:04 2 comments: 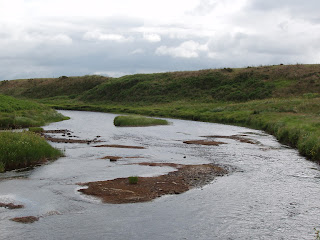 My posts on salmon fishing in previous years have been exuberant affairs fuelled by good catches of fish under favourable conditions, notably a good flow of water in the Thurso or Wick rivers.In the run up to my week on the Thurso beginning on July 15th, I watched with horror as the river level and catches fell sharply through June into July when heat added more fishing misery to the drought. As the week began, only Beat 2, nearest the sea was recording small catches of the fish who come and go with the tide into the lower reaches of the river.
Standard tactics for low water require small flies and early mornings before the sun gets on the water. Beat 5 was my Monday territory including the Island Stream shown above. Under normal good fishing conditions, only the green island in the distance is visible so all the extra 'islands' reflect the drought. I fished the beat without success until the sun was well up before giving in to the conditions. I repeated the exercise the following morning on Beat 3 before giving up for the week faced with even more sterile conditions on the higher up beats. The Thurso is fed from Loch More above Beat 13 and the picture below left shows a vast shore which is normally deep under water. In the picture on the left, the river shows her bones at Westerdale. Fingers crossed for my next week in September. 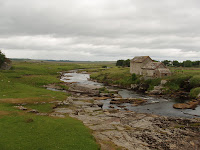 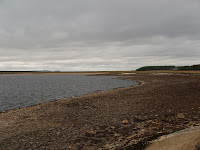 The following week I was invited to fish with friends on the Alness, about 80 miles south of Wick. It was suffering from the drought but still seemed to have a better flow of water than the Thurso. The fishing was unsuccessful but the saving grace was the scenery and the streamy boulder strewn water providing plenty of lies for fish. It's marked down for a revisit under better conditions. 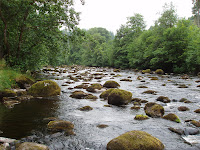 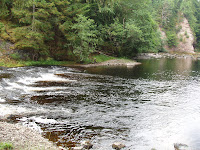 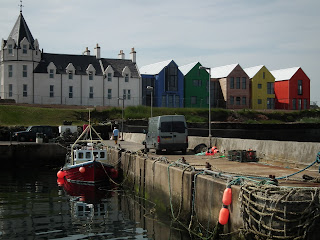 The Natural Retreats development of chalets and self catering appartments at John O' Groats is almost complete. The effect on the overall ambience of the northern outpost is very positive both visually and in the Tripadvisor reviews of guests who have already stayed there. I really like the brightly painted wood and serrated roofs of the old hotel extension, contrasting with the stark white outline of the nineteenth century building with it's eight sided tower, copied from the original built by Jan De Groot to make his many sons feel equal. I'm sure that Jan, the Dutchman after whom the village is named will be smiling in his grave. Seafarer Jan was given the franchise to run a ferry to Orkney by James IV in 1496. His descendants carry the name Groat. I was pleased to discover recently that an Isabella Groat is my GGGrandmother. 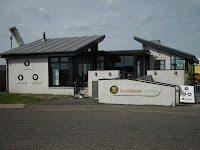 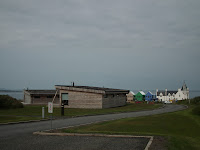 The chalet and apartments are now complemented by a new upgraded cafe/restaurant, The Storehouse and Natural Retreats have provided a new high speed launch for wildlife cruising, especially round the island of Stroma to the north. The harbour remains the base for the Orkney foot ferry seen here overtaking the Gills car ferry against the background of the south end of Stroma. John O' Groats remains a Mecca for the walkers and cyclists who want to cover the length of the British Isles. 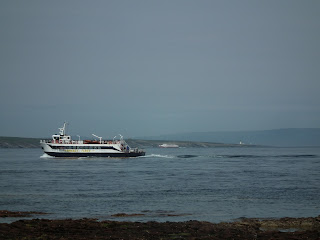 The moors around the north have an exceptional crop of bog cotton this year to the point where it looks as though it could be harvested. This shot comes from the road between Freswick and John O' Groats. 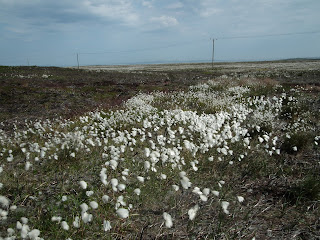 Needless to say given the long hot dry spell, the salmon fishing is a disaster- more later.

Julienas is typical of many villages in the Beaujolais, nestling in a valley surrounded by vines. Its a pattern that repeats all the way down to the south of the region. We stayed at Chez la Rose, a Logis in the village centre. It was a real find and we talked to other guests who had been using it as a stop over for years. The room was excellent and the food wonderful. There is an added bonus for walkers with a map from the hotel. Four different 8-12 Km walks start and finish in the village centre. We did the Circuit de la Montagne de Remont in about 2 hours giving us great views of the surrounding areas. I know that Beaujolais wine has a mixed press but the dark side of it's reputation is based on the banality of Beaujolais Nouveau. Single village Beaujolais in good years, eg 2009 and 2011 is not only excellent wine but very good value red when you think of the prices being charged in Burgundy just up the road. We bought halves of Domaine de la Combe Darroux, Julienas that we tasted at dinner. Further south we bought some 2011 Chenas at Chateau de Chenas as well as their gold medal winning Thesaurus, 2009 veille vignes wooded cuvee.

Where the Beaujolais ends in the north, the Maconnais begins. Just off the Macon-sud interchange it's a stone's throw to the cave at Vinzelles with it's enormous range of whites from the area. It has all the Pouilly villages and districts plus Saint Veran. We got a nice mixed case. Going deeper into the area took us to the village of Fuisse and the Burrier cave. Again the selection was vast but we concentrated on his excellent
classic Saint Veran. We tasted expensive wooded offerings that were.....not nice! Our next move took us north to Puligny Montrachet, pretty near the top of the tree for white Burgundy. We stayed with Celine and John Nicholls at Domaine des Anges in the central square for the first night and at Hotel Chouette round the corner for the second, both highly recommended. Again walking and wine was the theme. John kindly introduced me to local producer of village Puligny Monrachet, Alain Chavy before we struck out to Auxey Duresses to find the cave of Michel Prunier where we'd bought his veille vignes cuvee on an earlier visit. A quick stop at Wine Society favourite, Henri Prudhom followed by a visit to Mersault finished our tour . 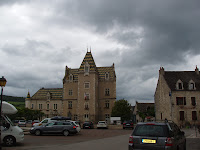 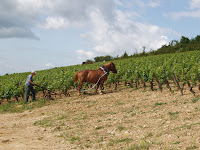 We then did a fantastic walk all the way up through the vines, first the village wines then the Grand Crus on the slopes. Near the top we caught sight of a horse and plough being used to turn the ground between the vines. At the top we were rewarded with a view of St Aubin on the other side of the slope where the wines are mercifully cheaper. On the way back we passed  a sixteenth century oratoire that commemorates the couple who owned the vineyard then. 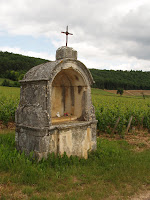 We dined at the Hotel Montrachet and next night had the tasting menu at Olivier Levevre's establishment. Both were excellent. Our overall impression of the Burgundy whites that we tasted was that they all seemed a bit too acidic and weak on the 'butteriness' that we expect and hardly value for money, but it's nice to have some in the cellar. Below is the total of our wine purchases on the trip, another reason for having a sturdy Volvo.
We were highly amused to hear every day from the French that 'pas de problem' has been systematically replaced by 'pas de soucis' so 'no worries' has translated well into the French vernacular, doubtless to the chagrin of The Academie Francaise, guardian of the language. 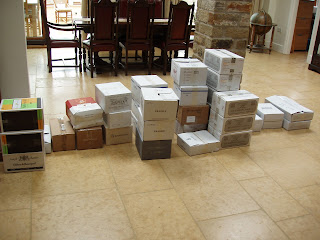 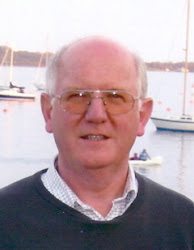 Alan Calder
Alan was born in Wick, Caithness and studied chemistry at Aberdeen University. Following a career with ICI and Zeneca he began writing in early retirement. He writes contemporary thrillers that have their roots in history.